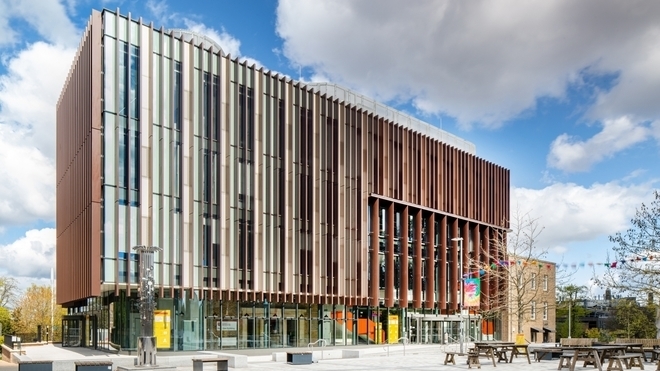 The Percy Gee Building, situated in the heart of the University of Leicester’s campus, is home to the Students’ Union.  After designing a spectacular award-winning transformation for most of the Percy Gee Building in 2010, architects at Shepheard Epstein Hunter were determined to come up with an equally impressive design for development of the remaining East Wing.

With a budget of £21 Million, the project involved partial demolition, refurbishment and extension of the existing East Wing to create a spacious, modern and accessible mixed-use building.

The building’s WOW factor comes in the shape of the new eastern façade of the four-storey extension which fronts directly onto the recently completed Fielding Johnson Square.

Created using Senior’s SF52 silicon glazed and fully capped curtain walling, with PURe® aluminium opening vents, the façade gives a light and spacious feeling to all four floors. With such a large expanse of glazing, thermal efficiency was a key consideration which was delivered thanks to the enhanced thermal efficiency of SF52 and the PURe® thermal break in the innovative patented PURe®  windows giving incredibly low U values.

Curved glazing and eye-catching perforated panels add to the dramatic appearance of the façade. For the main entrance, Seniors robust SPW501 Commercial Doors were chosen to cope with expected heavy footfall. The overall effect is a stunning entrance and façade to a spectacular building.

Named after H. Percy Gee, a director of local shoe firm Stead & Simpson and an early benefactor and promoter of the university, the new and improved Student Union building is now the main focal point for student activity, home to more than 150 different student societies, and a central location for support services.

The amount of social learning space for students in the East Wing has doubled and the building now features a new and vastly improved food court, a multi-purpose studio for performance societies, a state-of-the-art media suite, as well as a new informatics lab for the study of information science.